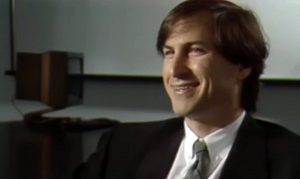 Revisiting any interview with the late Steve Jobs is bound to be an interesting experience. After all, the man who revolutionized the technology game with two stints at Apple was always known to have a knack for saying things that triggered the imagination and provoked greater thought than any of his other contemporaries.

Those two qualities were trademark themes of nearly every public speech he has ever given or any conversation he’s had with a journalist. The effect of those qualities, furthermore, seems to increase in power and poignancy as time goes on.

Case in point: this “lost” interview with the deceased Apple cofounder and CEO in 1990.

The footage was shot in 1990 while Jobs was CEO of NeXT, the software company he founded in 1985 after losing a power struggle that saw him ousted from Apple. It is great to watch, not least because it allows the viewer to judge Jobs’ ideas and vision in complete retrospect. Simply put, the way in which Steve Jobs’ outlook on the future of technology correlates with what has come to pass is amazing.

What’s truly brilliant about the interview, though, is the way in which Jobs’ words have stood the test of time. Many of the same lessons that any given person could have taken from this particular interview in 1990 still apply today. In this list, we will review them as we go through the timeless lessons that can be taken from Steve Jobs’ lost interview.

Be Da Vinci; Be Both The Thinker AND The Doer

Steve Jobs couldn’t help but shine a light on those he considered to be doers and thinkers all in one; people who not only accomplished a goal but figured out everything, including the methods used to achieve that goal.

Finding analogies that fit this description isn’t hard either — the English professor who is also a great writer, the coach who is also a great player, etc. — but Jobs provided his own example to show that these types of figures aren’t simply unique to his industry.

“Leonardo was the artist, but he also mixed all of his own paints. He also was a fairly good chemist who knew about pigments, knew about human anatomy and combining all of those skills together — the art and the science, the thinking and the doing — was what resulted in the exceptional result.”

Like Da Vinci, one of the world’s most renowned Renaissance Men, Jobs says the people who’ve accomplished the greatest projects usually turn out to be those that both thought the ideas out and applied the skills necessary to bring them to fruition.

Look To Create Something That’s Understandable

On more than one occasion during the interview, Steve Jobs talked about how Apple’s earliest PC models and the success behind them. The key, he says, was in making a product that left as little thinking as possible for the user.

Long story short, Jobs got better results out of making something that anyone could easily understand and, in fact, ended up creating an even stronger product than others.

His thinking in doing so can be applied to anything, whether it be a blog or a business; those that are easy to understand and leave little thinking for the users to do will attract people.

It’s Expensive, But College Can Be The Best Time To Start Something

In discussing higher education’s role in propelling the development of computers, Jobs goes back to the days when the US department of the defense was building ARPANET, a project that is cited as one of the earliest incarnations of the Internet. When a prototype of ARPANET was created, the US gave it to the university community and allowed individuals to tinker with it for a few years to help make it better.

Years later, the universities handed a refined ARPANET back to the US military and also kept a version of its own, one that connected the collegiate research community for years to come.

“Higher education has actually led the way, that’s why we [NeXT, Inc.] started off focusing exclusively on higher education because where else could you find 5,000 people on a network but Carnegie Mellon University, as an example? So higher education has been five years ahead of business in using computers in some of these powerful new ways, which we’re going to see now ripple into business,” Jobs said.

Jobs is right in asking such a question. Where else could you find 5,000 people that are all connected in one network, in such close proximity, but a college campus? That network represents the opportunity to test a project, campaign or product amongst people who are easily accessible and comprise the same age demographic.

In the same way that one of the earliest forms of the Internet was developed on college campuses, anyone has the opportunity to test their creation and see people’s reaction to it while in higher education.

Steve Jobs and Steve Wozniak weren’t supposed to be the bosses at their company. In fact, they’d offered bigger companies to take a bite out of Apple before starting it themselves.

“At the time we started Apple, Woz [i.e. Apple cofounder Steve Wozniak] was working for Hewlett Packard, I was working for Atari for [founder] Nolan Bushnell, designing video games and we went to Atari and showed them our early prototype and we went to HP and we encouraged each company to hire the other one and let us do this for them.

And we got turned down by both places, probably for good reasons, but we started a company because it was the only alternative left.”

Having been cornered into their last resort, Jobs and Woz built Apple on their own, creating one of the greatest and most revered companies of our generation.

They became the makers of not just good products, but loved products. Under Atari or HP, there is no doubt that they might not have been able to accomplish a certain project or do things their own way. Decades later, the result of their plan B is renowned as the stuff of legends.